You are here: Home / Arts & Entertainment / Mashup Monthly for November 2011 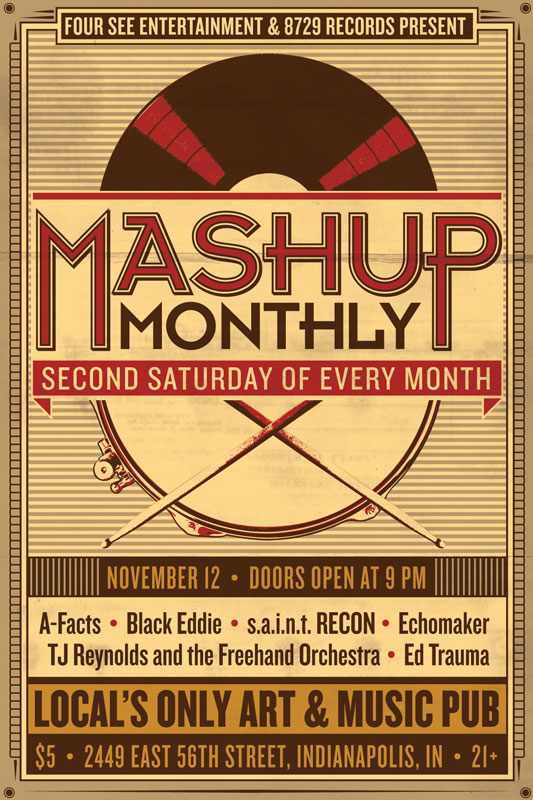 Four See Entertainment and 8729 Records have joined forces to help unite the local music scene in Indianapolis. The two local companies, owned and operated by members of the local hip-hop scene, have collaborated on a new music series at the popular Indianapolis music venue, Locals Only. The monthly event, appropriately titled “Mash Up Monthly”, is the brainchild of local hip-hoppers Brad Real and the members of Sleeper Cell, who were looking for a way to bring, not only hip-hop, but all genres of music to the forefront of their local community.

“We really wanted to be able to bring together an audience of people who may not normally get the opportunity to experience one another. Indianapolis has such a dynamic music scene and I think we can all learn from each other if given the chance. That’s the foundation for the idea behind the monthly event”, stated local hip-hop artist Brad Real.

“With so many shows focusing on one genre of music, Four See Entertainment and 8729 Records are bringing a diverse line-up of music together for one night each month. Most people say they love all types of music so we thought why not create an opportunity for fans and music lovers to experience that unity at one single event”, said Shay of Sleeper Cell.

Saturday, November 12th will be the kick-off show featuring local acts A-Facts, Black Eddie, s.a.i.n.t RECON, TJ Reynolds & The Freehand Orchestra and Echomaker. DJ Ed Trauma will be providing the soundtrack for the evening’s festivities before, during and following the performers. Doors open at 9pm with a $5 cover at the door. Locals Only is located at 2449 East 56th Street in Indianapolis.