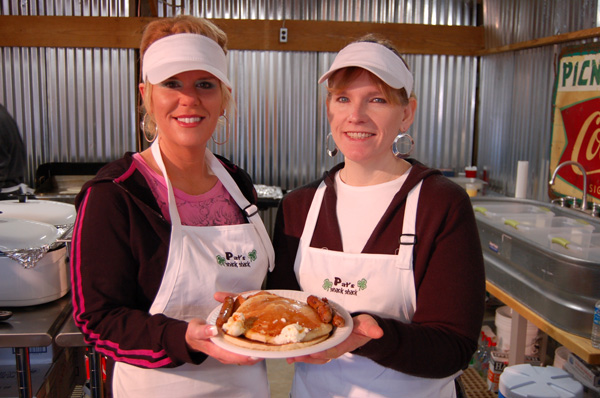 When Indiana’s top ag man taps the ceremonial sugar maple on Sat., March 3 at noon on Burton’s Maplewood Farm, he’ll christen the fourth annual National Maple Syrup Festival.  Joe Kelsay, director of the Indiana Department of Agriculture, also will signify the first tree in the U.S. to be tapped for the 2012 maple sugaring season.

“Indiana is the southernmost state in the U.S. Maple Belt,” said Tim Burton, co-owner of Burton’s Maplewood Farm and co-founder of the festival, “so as far as we know, the first trees are tapped here.

Though there are about 100 maple syrup producers in Indiana and countless festivals, this is the first and only national maple syrup festival in America.  It’s held the first two weekends in March at Burton’s Maplewood Farm and Medora Community School.

Visitors can expect to learn about the modern-day maple sugaring process once the sap rises up out of the trees, as well as the history of maple sugaring from Native American and French historic encampments.  There’s also live music, booths from Indiana Artisans and food ranging from pancakes and sausage to maple pork chops and maple baked beans.

The festival starts at Medora Community School, where pancakes and sausage are served and the Sweet Victory Challenge baking and cooking competition takes place.  The competition is sponsored by Vermont-based King Arthur Flour, the oldest flour company in the U.S.  Judging takes place on March 3 for the youth division and March 10 for the adult division.   For details, visit www.SweetVictoryChallenge.com.

Then visitors ride shuttle buses from the school to Burton’s Maplewood Farm, where they’ll see the more than 700 sugar maple trees, Pat’s Snack Shack and the famous Mellencamp Maplehouse. In the Maplehouse is a large evaporator that boils down the tree sap to syrup; it takes 40 gallons of sap to produce one gallon of syrup.  The Maplehouse also features the country’s largest Rumford fireplace, making it a warm and cozy stop.

Children’s activities include a farm animal petting zoo, rope-making demonstrations by Cowboy Ron, a ventriloquist, face painting, crafts and more. Live music is located in Pat’s Snack Shack and will include a variety of bands.

New this year is a Dutch Oven Cookoff organized by Lesley “Dutch Oven Diva” Tennessen, and church services by the Christian Country Cowboy Church on March 4 and 11 at 10:30 a.m. at the Mellencamp Maplehouse.

Proceeds from the festival benefit the Heads Up!!! Foundation, which will use the money for the Riley Hospital for Children’s “Camp About Face” at Bradford Woods, a summer camp for youth with craniofacial anomalies.