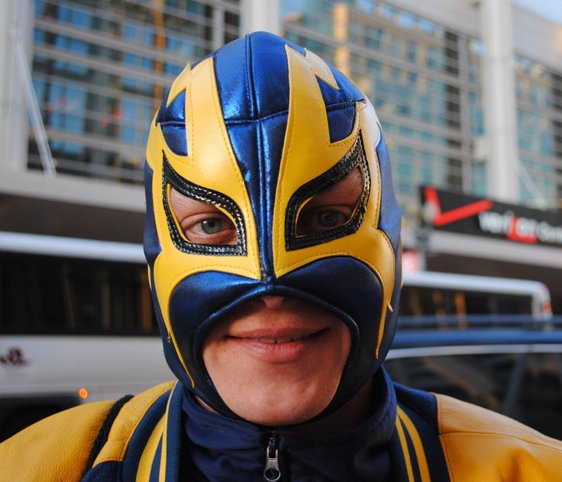 GET ON THIS BANDWAGON PEOPLE!!

Your Indianapolis Pacers need you. Why you ask? Well because they’re doing super awesome in their regular season, about to go and do some amazing things in the playoffs and where are you?

We’re second in our division, 40 wins to 22 losses, our offense is ranked 4th, our defense is ranked 2nd in the Eastern conference, and not to mention we have some really cute players out there, Lou? I’m talking to you!

But with all of that, I still have to ask,

PEOPLE OF INDIANA:
WHERE ARE YOU GUYS?!?!
YOU’RE NOT IN THE STANDS!!
WHY NOT?!

I wanted to get to the bottom of this craziness, and help spread the word of the boys in blue so I brought in the big guns. I went in search of the one man I knew who could rally an entire town behind the “best kept secret in Indiana”.

I’m talking about the masked marvel. The legendary louche. The one. The only El Pacero.

Yes folks, I managed to snag an interview with this super fan to bring to you another reason, if you needed one, to come get behind your team.

Ah, I don’t know about being a local celebrity. Maybe I’m good at being a weirdo who Pacers fans recognize, but that’s about it. It’s still strange to hear people yelling your name in the Fieldhouse, and you don’t recognize them, but I’m kinda strange so it all ties in nicely.

How did you come up with El Pacero?

My father was a luchador and I wanted to follow in his footsteps. After
college, I moved to Mexico City to train in the art of lucha libre wrestling.

After Reggie retired, I felt it was my duty, my
obligation, to come back to show my support for your Indiana Pacers.

How long have you been El Pacero?

This is my third season in a row of wearing my work clothes to Pacers
games. I haven’t missed a single home game and my streak is up to 120 something games now. It’s hard to believe, but not really as hard as it sounds. Three seasons ago, it was depressing at Pacers game because we were always losing. El Pacero seemed to cheer up people after losses, and cheered up myself, and three years later I think I’m stuck in my work clothes!

So be real with me, are you really a womans champion?

Yes, I am really the Women’s Wrestling Champion of the World. It’s kind of confusing to some people because I am a man, a very manly man, but I only wrestle women. It’s a lot better than the alternative. Who wants to roll around with sweaty guys?

How long have you been a die hard Pacer fan?

I’ve been a Pacers fan ever since I can remember. My first memory is in
Market Square Arena with my basketball team in like 3rd grade. Our coach was one of the doctors for the Pacers, and someone got hurt so he had to leave all of us to go back in the locker room. I still remember how jealous I was!

What’s your all time favoritre Pacers moment that you’ve seen in the stands?

My favorite moment was probably in Washington DC two years ago at a game against the Wizards. Jim O’Brien benched Roy Hibbert right before he was about to get a triple-double, and I’ve never seen Roy more furious. It was awesome.

What’s your favorite moment this year?

There are a lot of favorite moments from this season already! I drove 18 hours straight to Orlando and went to all three All-Star Game events to cheer on Roy Hibbert and Paul George. I went to Detroit for the Pacers vs Pistons game on New Years Eve which was a blast. Thirty four of us Area 55 members made the trek to Milwaukee to take on their Squad Six fan section. We destroyed them, took over the arena… and oh yeah, the Pacers won, too! 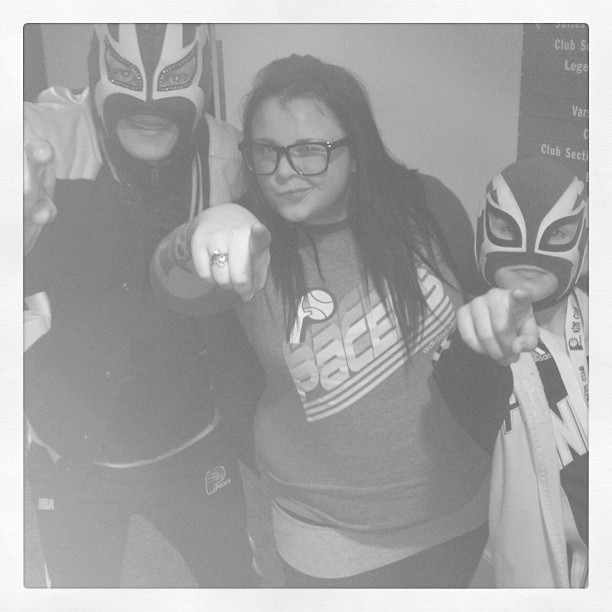 How awesome is it cheering on with the members of Area 55?

Being a member of Area 55 is a lot of fun. This is our second season and we’re pretty much like a great big family. It will be weird when it’s finally over and I have to return to sitting in a seat and trying to be a normal fan.

The first year, I uploaded an audition video telling Roy why I should be a part of Area 55. Then I showed up to the live audition and sang a short song about him accompanied by castanets. This past season I wrote a 100% original composition, accompanied by my ukulele, about Roy Hibbert and I think he loved it long time.

Who comes up with the chants?

We all come up with the chants together. We have a lot of standard chants, but every game we seem to come up with new chants, mostly to make fun of the opposing players and try to get in their heads.

Who would you like to see the Pacers play in the playoffs?

At this point, I would be happy to see us play against the Dwight Howard Orlando Magic in the first round of the playoffs. We will destroy them!

Who do you think the biggest pick up has been this year? David West, George Hill, Lou Amundson, or Barbosa?

I think David West was the biggest game changer to the chemistry of our team. The Pacers having Hill at the starting Point Guard position has also been a big difference maker, so it’s probably a toss-up between those two. Lou has made the biggest impact on the fans. LOOOUUUUUUUU!!!!

How many of the players have you met?

I’m not really an autograph kind of guy, and not sure all the players are crazy about the masked man, so I tend to keep my distance. I’ve met Roy Hibbert a bunch though, and he is the nicest guy in the world.

Do you have more than one mask?

I have several masks, but I usually wear the same one. That’s what the smell is.

Does the lack of national attention on the Pacers upset you? Or do you think the team is better under the radar?

I don’t believe the Pacers being kept a secret is a good thing, or will get us any more wins. I’m not surprised by the lack of attention in the national media, but I am disappointed it has taken the local media this long to start to focus on the Pacers.

Why do you think people aren’t showing up to the games?

That’s the question of the season. Some people say Indy is a bandwagon city. The other thing I hear a lot is that the Pacers are still a bunch of thugs. The brawl happened over 8 years ago, the Pacers got rid of all the trouble makers, and rebuilt themselves in the promised three years. We’re third in the East now and have the best record in the NBA for the month of April. My biggest fear is that people still don’t know that the Pacers are good again. The Pacers are now a great basketball team Indy! Wake up!

What do you think people who don’t show up to the games are missing out on?

You can sit on your couch and watch the game for free, but you are missing out on all the fun and excitement of watching the Pacers win live! The cheering, the laughing, the booing, the chanting, the partying… once you start going to games you can’t stop. We have won so many games this season, it’s just crazy compared to past seasons. If you haven’t gone to a game this season, you missed out on a truly memorable ride that brought back the Pacers Basketball we all love and remember.

Look for El Pacero and his 1976 AMC Pacer (the El Pacero Mobile) at all the Pacers Playoff Games. The Pacers Tailgating Organization (PTO) has been going strong for two seasons now and will definitely be partying for the Playoffs! They’re at South and Penn just north of the Arby’s, so don’t be a stranger Indy!!

Jacqueline Dwigans is a 20 something newlywed, newlymom who lived her in Indy her whole life, and is just now is getting out and doing all the fun local things that this city has to offer, with her hubsy and baby in tow weather they like it or not. =)