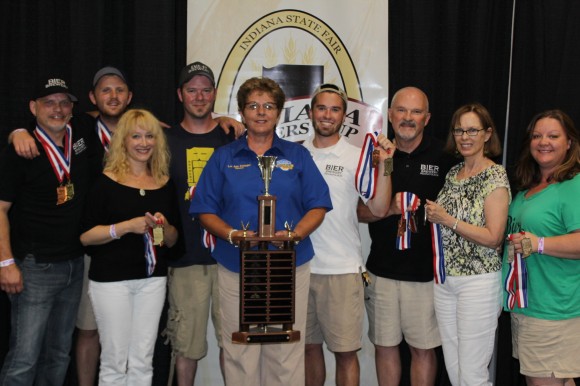 The 14th annual Indiana State Fair Brewers’ Cup set another record for entries.  This year’s event included 1,124 participants.  More than 80 judges from around the country tasted and rated the entries.  Indianapolis’ own Bier Brewery earned the Brews of Indiana Guild Championship Brewery Trophy for the second year in a row after earning four first place beers.

Tom Wallbank of Zionsville won the title of “Homebrewer of the Year” for the first time after accumulating three first-place wins. He has been brewing since 1995.  “I’ve never done this well,” Wallbank said. “I’ve not been brewing too much this year, so I was very excited and very surprised.”4

For the first time this year, the Indiana State Fair Brewers’ Cup was a qualifying event for the Masters Championship of Amateur Brewing (MCAB). This means that the first-place winners in each of the 23 different homebrew categories are qualified to compete in the MCAB championship competition, which will take place next year.  Qualifying events are considered the biggest and best in homebrew competition, so the MCAB championship is considered a “champions’ championship,” featuring the best home brewers from across the country.