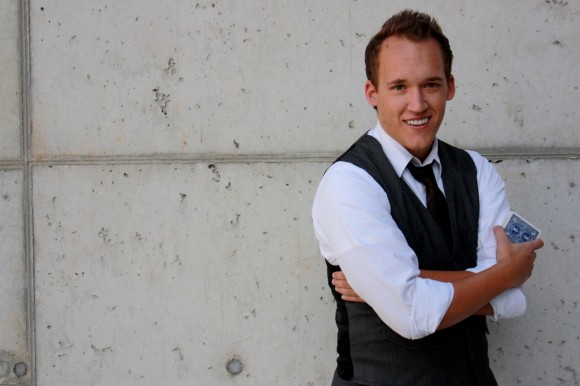 Illusionist Jared Sherlock and his company perform an intimate evening of illusions, comedy and dance at The Tarkington in Carmel, IN on July 20 at 7:30PM.  This vibrant trio of performers brings an eclectic and high-energy show that will delight and amaze the entire family. Witness a lady getting sliced into pieces. Rack your brain as water defies gravity. Be a part of an illusion yourself! Do it all, and Dare To Let Go!

Sherlock grew up in Carmel, Indiana and began performing magic at age eight.  He graduate with honors in Theater Entrepreneurship from St. John’s University in Collegeville, MN.  He has been featured in The Bob and Tom Show on the radio, The Wall Street Journal Online, and MSN Money.com.  He was the winner of “Top 20 Dorm Based Businesses” by StartUPNation.com, and “Entrepreneur of the Year” at St. John’s University in 2010.

Sherlock has also produced original theatrical productions in cooperation with charities and benefits via his foundation “Arts Now” in pursuit of feeding, clothing, educating, and granting the last wishes of kids;
raising over $55,000 for central Indiana and Minnesota communities. Jared was also a top 10 show at the 2011 Indy Fringe Festival and the #1 show at the Indy Fringe Winter Magic Festival.

July 20th’s performance is in support of Jay Ruckelshaus.  Jay Ruckelshaus was critically injured in a diving accident Saturday night, July 16, 2011.  Jay was 2010-2011 Valedictorian from his high school, Cathedral High School in Indianapolis.  On top of his academic successes, he is an accomplished swimmer, cross-country runner and crew athlete.

Tickets are $28 for adults, $20 for seniors and kids under 12.  For more information on the show, visit http://www.TheCenterForThePerformingArts.org

For more information on how you can help Jay,
visit http://www.prayforjay.com.