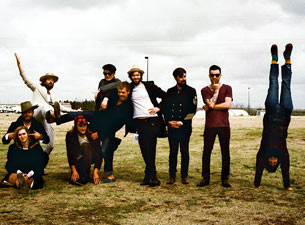 Edward Sharpe & the Magnetic Zeros continue to wow audiences with their jovial and euphoric live show, which has sold out venues across the country. Better still, at-capacity crowds are singing along at these shows- evidence of the devoted fan base that is flourishing even in cities the band is visiting for the first time.

The band recently released their sophomore album, HERE, on Community Music / Vagrant Records. Self-produced by the band, the album was recorded in Bogalusa, Louisiana and Ojai, California. Alex Ebert says, “The making of this album has spanned a time of immense perseverance and, thankfully, co-creation…Making this album has been a test of our faith in ourselves and in the universe, and brought us closer together and in greater harmony with one another… A deluge of music has been written and recorded, and we are intensely excited to share it with anyone who wants to feel it.”

Tickets are on sale now. General admission tickets are $22.50 in advance, $25 day of show. Purchase your tickets through LiveNation.com, Old National Center Box Office, Ticketmaster outlets, or charge-by-phone at 1-800-754-3000. Applicable fees apply to all ticket sales.