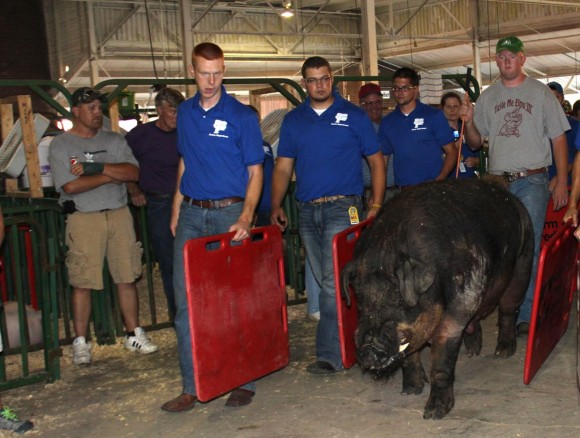 In his third appearance at the Indiana State Fair’s World’s Largest Male Hog Contest, Tickle Me Elmo III tipped the scales at 1,303 pounds, winning the competition by a margin of 343 pounds.

Owner Cory Patton, 22, of Sellersburg, Ind., won the competition with Tickle Me Elmo in 2010, finished in second place in 2011 and earned a another first-place award this year. Tickle Me Elmo is four-and-a-half years old.

“I’ve been showing pigs since I was five or six years old,” Patton said. “I have a lot of fun with it.”

Patton’s competition was Jay Rulon of Arcadia, Ind. His boar, Zeus XL, weighed in at 960 pounds.

Guests can visit Tickle Me Elmo at the north entrance of the Swine Barn during the fair.