You are here: Home / Arts & Entertainment / Carolina Chocolate Drops at The Vogue Theatre in Indianapolis on November 17th 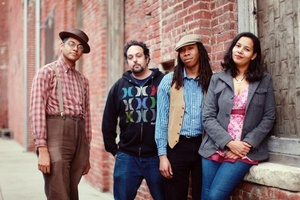 With their 2010 Nonesuch debut, Genuine Negro Jig—which garnered a Best Traditional Folk Album Grammy last year—the Carolina Chocolate Drops proved that the old-time, fiddle and banjo-based music they’d so scrupulously researched and passionately performed could be a living, breathing, ever-evolving sound. Starting with material culled from the Piedmont region of the Carolinas, they sought to freshly interpret this work, not merely recreate it, highlighting the central role African-Americans played in shaping our nation’s popular music from its beginnings more than a century ago. The virtuosic trio’s approach was provocative and revelatory. Their concerts, The New York Times declared, were “an end-to-end display of excellence… They dip into styles of Southern black music from the 1920s and ’30s—string-band music, jug-band music, fife and drum, early jazz—and beam their curiosity outward. They make short work of their instructive mission and spend their energy on things that require it: flatfoot dancing, jug playing, shouting.”

On Leaving Eden, produced by Nashville stalwart Buddy Miller—the go-to guy for artists ranging from Robert Plant to Emmylou Harris—and recorded in his home studio, the Carolina Chocolate Drops illustrate their own adaptability to growth and change as the original lineup expands from three to five players for this recording and their new repertoire incorporates more blues, jazz and folk balladry alongside brilliantly rendered string-band tunes.

Would you like to go see Carolina Chocolate Drops for FREE?

To enter please fill out the form below or e-mail us with your full name,valid e-mail address by 11:59pm on Tuesday, November 13, 2012 and one (1) lucky winner will be chosen at random to receive a pair of tickets.

The winner will be notified byWednesday, November 14, 2012 via e-mail.