You are here: Home / Arts & Entertainment / Reverend Peyton’s Big Damn Band at The Vogue Theatre in Indianapolis on November 23rd 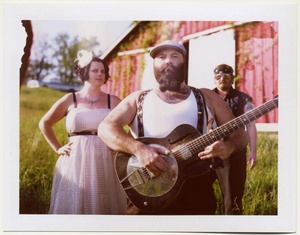 Roaring out of the southern Indiana foothills comes Reverend Peyton’s Big Damn Band playing a brand of Americana and Blues that stands alone – Delta blues and hillbilly fervor combine with musical acuity sharp as razor wire – best know, this trio is a force to be reckoned with. Locked in with an audience, the band create their own community and welcome the crowd into it, transporting them away from their troubles to joyous release, the way great musicians have done for centuries. The Rev. J. Peyton, his wife Breezy and distant cousin Aaron “Cuz” Persinger are a living breathing embodiment of the traditions and hard work ethic native to their Brown County, Indiana home. Their new album Between The Ditches is a chronicle of this lifestyle.

With a reputation for their incendiary live shows well established, The Big Damn Band set out to make the album that would finally capture the same heat. Recorded at White Arc Studio in Bloomington, Indiana, the album was produced by The Rev. Peyton and Paul Mahern (John Mellencamp, Iggy Pop), and mastered by Brian Lucey (Black Keys, Dr. John, Shins).

In 2009, they toured opening for Clutch, an extensive headlining tour of Europe and began their relationship with the Van’s Warped Tour, playing 12 dates in 2009 on the Kevin Says stage. They were on the entire 2010 Van’s Warped Tour on the Alternative Press stage and they received the Best Band of Warped Tour award, voted by the crew, bands and promoters. They’ve also toured with Flogging Molly, Rev. Horton Heat, Derek Trucks and Mofro just to name a few.

This band is fun sure, a lot of fun, but they are for real. From virtuoso musicianship to great songwriting, Between The Ditches has got it all. All from a little Brown County, Indiana band that’s got the nerve (and the right) to call themselves, Rev. Peyton’s Big Damn Band!

Would you like to go see Reverend Peyton’s Big Damn Band for FREE?

To enter please fill out the form below or e-mail us with your full name,valid e-mail address by 11:59pm on Thursday, November 15, 2012 and one (1) lucky winner will be chosen at random to receive a pair of tickets.