You are here: Home / Arts & Entertainment / The Whigs at The Vogue Theatre in Indianapolis on November 13th 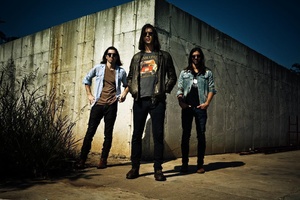 Rock band The Whigs will perform on Tuesday, November 13 at 8 p.m. ET (doors open at 7 p.m. ET) at The Vogue Theatre in Broad Ripple with Kuroma.

From Athens, Georgia, the band consists of lead singer and guitarist Parker Gispert, drummer Julian Dorio and bassist Timothy Deaux. Gispert and Dorio formed The Whigs in 2002 when they started playing together while studying at the University of Georgia. In the beginning, the band started playing at shows around campus. Soon, the band moved up to higher-profile performances, including opening slots for Franz Ferdinand and The Killers.

Several years later, the band recorded their debut album, Give ‘Em All a Big Fat Lip. The album was independently released in 2005 and the band’s fan base grew tremendously. After the band graduated from college that spring, ATO records signed them to their label and re-released their debut album in 2005. They released their second album, Mission Control, in January 2008. The band toured with Kings of Leon in 2009 and spent the majority of the year writing for their third album, In The Dark, which was released in 2010.

In 2011, the band continued touring around the country and writing songs. The Whigs announced in the beginning of 2012 they were recording their fourth album, Enjoy the Company, which was released on September 18.

Would you like to go see The Whigs for FREE?

To enter please fill out the form below or e-mail us with your full name,valid e-mail address by 11:59pm on Wednesday, November 7, 2012 and one (1) lucky winner will be chosen at random to receive a pair of tickets.

The winner will be notified by Friday, November 9, 2012 via e-mail.