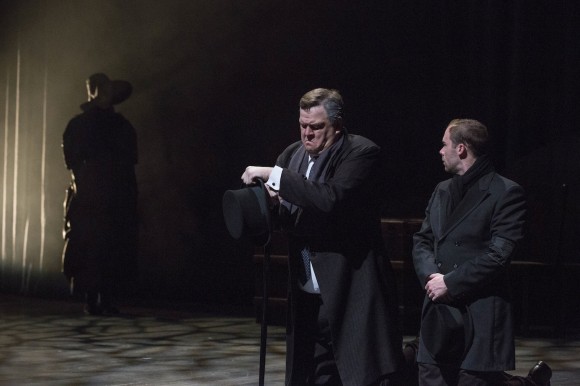 The Woman in Black, based on a novel by Susan Hill and adapted for the stage by Stephen Mallatratt, was a rather underwhelming experience at the Booth Tarkington Civic Theatre in Carmel.  I’m still trying to trace the root of my issues with the play and in my opinion, its lack of thrills.  Maybe I’m desensitized from watching haunting movies from Japan and torture epics from the good ol’ U. S. of A.

The Woman in Black certainly deals with violent death and the agony of mortality in a much subtler way.  Don’t get me wrong; subtlety is very important.  However, there just wasn’t enough action to keep me and some parts of the audience entertained.  I heard more than one snore, especially throughout the first act, which features little more than dramatic recitations and drawn-out exposition.

On the other hand, I marveled at the skillful lighting and unique sets.  There was a marked minimalism in the show, which chooses light and shadow over props.  That proved sustenance enough to get me to the next act.  Throughout The Woman in Black, a persistent thread of tension pulled me along; I wanted to know the story behind that damn woman.

The second act features the majority of the action and felt significantly creepier.  I should note that both (the play features a cast of two) actors performed very well.  Each played more than one character and gave their all to every role.  Overall, the second act engaged me much more than the first.

While I didn’t experience as many chills as I expected, in retrospect I can appreciate the muted format of The Woman in Black.  Was I particularly titillated during my appreciation?  No.  But I enjoyed myself and would recommend the play to those who like a minimalistic ghost story.

The Woman in Black concludes with three performances this week: