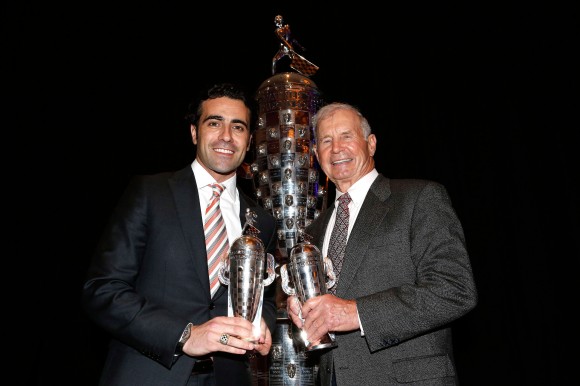 AUBURN HILLS, Mich — BorgWarner presented Dario Franchitti with his third BorgWarner Championship Driver’s Trophy(TM) during the 2013 Automotive News World Congress held in Detroit, Michigan, on January 16. Known as the “Baby Borg,” the personal keepsake sports a sterling silver visage of the 2012 Indianapolis 500 winner, a duplicate of the image displayed on the prestigious and historic Borg-Warner Trophy(TM). Team owner Chip Ganassi also accepted a BorgWarner Championship Team Owner’s Trophy(TM), his fourth since 2000. As a special honor, Parnelli Jones was presented with a Baby Borg commemorating the 50(th) anniversary of his Indianapolis 500 victory in 1963.

“From the turbochargers that boost every engine in the IZOD IndyCar Series to the prestigious Borg-Warner Trophy, we are proud to be part of a century-long tradition of achievement, competitive performance and technology leadership at the Indianapolis 500,” said Timothy M. Manganello, Executive Chairman, BorgWarner. “Dario, Chip and Parnelli are part of an elite group of champions who have made the trip to Victory Lane not once, but several times. We are pleased to present these prestigious symbols of their achievement.”