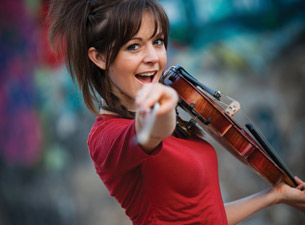 YouTube sensation Lindsey Stirling is perhaps the first – and only – artist in the world to blend classical violin, modern dance and The Legend of Zelda. You can catch Stirling at 7:30 p.m. on Tuesday, March 2 at Deluxe.

Having originally impressed the nation as a quarter-finalist on the fifth season of America’s Got Talent, this musical Utah resident proceeded to take YouTube by storm with imaginative music videos, covers, and performances like dubstep violin track, “Crystallize,” “Starships” with Megan Nicole, Zelda Medley, and “Game of Thrones” theme with Peter Hollens.

Stirling reveals that she first started playing violin when she was six years old and practiced for a half hour to an hour a day while she was in school. “And now I feel like I play constantly,” she says. While she was known for her hip-hop tracks on America’s Got Talent, Lindsey’s since expanded to EDM (electronic dance music), which she says feeds her soul.

On September 19th, Lindsey released her self-titled debut album, Lindsey Stirling, coming off the heels of an incredibly successful presence on iTunes. Comprised of 10 original tracks, the album showcases Lindsey’s signature violin-electronic-dubstep style – opening with “Crystallize,” her most popular piece. Lindsey has already sold over 300,000 songs, several of which have hit the iTunes Top 100 as well as the top of the digital electronic charts.

“My musical style is a reflection of my personality,” Lindsey shares, “and through it I hope to share my belief that no one should be afraid to be themselves. All my songs were created to depict specific themes that I pulled from my own life experiences. ‘Spontaneous Me’ is about having the courage to love yourself for who you are.”

For more information about Stirling, check out her website:  http://lindseystirlingviolin.com/