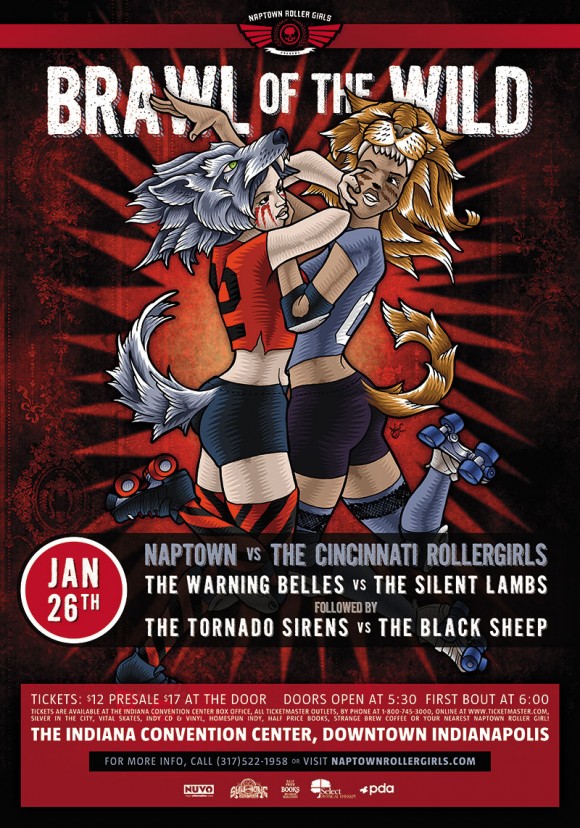 Indianapolis’  internationally-ranked roller derby team is back at the Indiana Convention Center for their second home bout of the season!

Coming on the heels of a sold-out crowd at the Marsh Blue Ribbon Pavilion to open their seventh home season, the Naptown Roller Girls will be at the Indiana Convention Center Saturday, January 26th, 2013 for “Brawl of the Wild.”

This bout welcomes back the internationally-ranked Tornado Sirens to the home crowd for the first time since their second run to Women’s Flat Track Derby Association (WFTDA) World Championships last fall.

The Tornado Sirens and Warning Belles will take on the A and B-teams of the Cincinnati Roller Girls (CRG).  CRG and NRG have met several times throughout both league’s histories, including in the 2011 “Monumental Mayhem” tournament (played at the Convention Center).

Doors open at 5:30 PM to the general public, with the Belles facing off against the Silent Lambs at 6:00P.M. Tickets are $12 apiece via all Ticketmaster outlets, the Lucas Oil Stadium box office, or our local vendors around the city.  Tickets will also be available at the door for $17.  Kids two-under are free.  Kids three-12 are just $10. Military with ID: $8 (limit 2 per ID).  Students with ID: $12 (limit 1 per ID).

Partial proceeds from the bout will go to benefit the Jack Barklaus Foundation, a non-profit organization dedicated to aiding the Humane Society of Indianapolis. Pet supply donations will be accepted at the bout.

“As the ‘amateur sports capitol of the world,’ we’re so proud to call Indianapolis home, “says league spokeswoman “Peyton Slamming” (Devon Dean). “Playing at the Indiana Convention Center while the Pepsi Coliseum is undergoing a make-over was a natural fit for us. We love the opportunity to play downtown and maybe attract some new fans.”