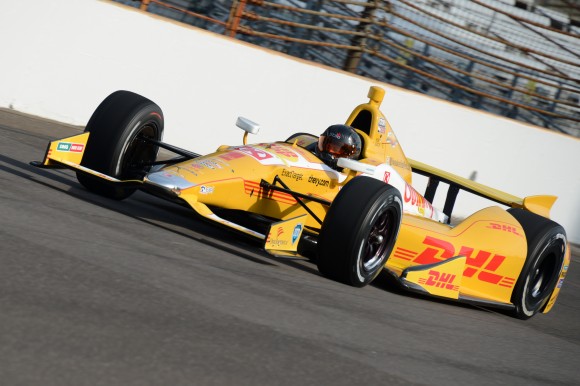 But Busch is still taking a cautious approach toward any thoughts of participating in “The Double” of racing in the 97th Indianapolis 500 and the Coca-Cola 600 at Charlotte Motor Speedway on Sunday, May 26.

“I need to get more comfortable in the Indy car because on a day like today, I’m white-knuckle, my hands were tense and firm, and that was only after 10 laps,” Busch said. “And so then it started to settle in.

“So there’s the mental side of it, there’s the physical side, there’s the sponsorship side that has to come together, and right now with Kyle Moyer (general manager, Andretti Autosport) looking sideways at Michael, Michael wants to do it, but they’ve already got five cars committed to trying to qualify for the Indianapolis 500 this year.

“To crawl, then walk, and then walk and then run, I think the proper thing is to go out and experience this car at another oval track and get into a race and experience what the buffeting is and the movement of the car when all the downforce changes.”

Busch completed the Rookie Orientation Program in which all drivers must participate to compete in Indianapolis 500 practice and qualifying, under the supervision of INDYCAR officials. Busch fulfilled all three phases of the program: 10 laps at 200-205 mph, 15 laps at 205-209 mph and 15 laps at 210-plus mph.

“Today was an ideal day,” Busch said. “I couldn’t have asked for anything better as a rookie to come to Indy and have the track prepped the way it was and have the perfect weather conditions.”

Busch entered into the test knowing that driving into Turn 1 at IMS in an open-wheel Indy car would provide different challenges from what he’s experienced  in a Sprint Cup stock car while driving in the Crown Royal presents the “Your Hero’s Name Here” 400 at the Brickyard Powered by BigMachineRecords.com.

“Today, that was the biggest transition,” Busch said. “When you want to step into the real world, that’s to hold it wide open, and when you do that, your brain says, ‘Wait a minute, you’re not supposed to do that because in the stock car how heavy it is and the lack of downforce.’ So when I did hold it wide open, I was off on my line, actually apexed too early, had a little extra wheel input on exit, and it changed the game. But then once I left it on the floor, the car started to come back to me and the pace started to slow down in my mind, even though the pace kept getting quicker with lap time.”

Andretti was thrilled with Busch’s performance.

“I would say the day went as good as we could have expected. Kurt did exactly what I thought he was going to do. He just drove exactly the way we wanted him to do it. He gave great feedback, right on pace, built up to it nice and steady, didn’t do anything stupid, which we knew he wouldn’t, and it was a really good day.”