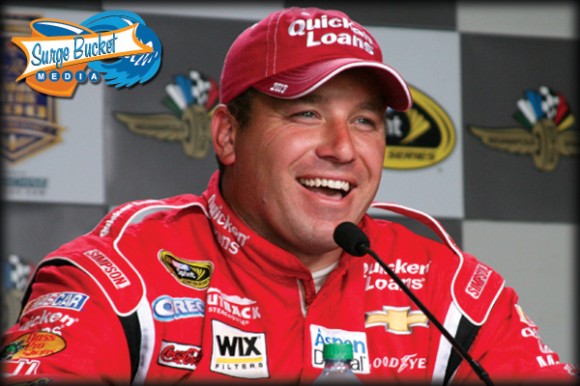 In NASCAR Sprint Cup Series qualifying, South Bend, Ind., native Ryan Newman won his first Indianapolis Sprint Cup pole and the 50th of his career in turning a lap of 187.531 mph in his No. 39 Quicken Loans/The Smurfs Chevrolet to take the top spot for the Crown Royal Presents the Samuel Deeds 400 at the Brickyard Powered by BigMachineRecords.com on Sunday.

This will be Newman’s seventh top-five start in 13 career Brickyard races, an event record. He previously shared the record with Jeff Gordon.

“It’s a good day for Stewart-Haas Racing,” Newman said. “I’ll admit I was emotional. For me, it’s special because it’s the Brickyard, and I’ve never won a pole here. I’ve won so many poles, but it has been so long since I’ve won a pole. I felt we had a shot at it; I didn’t know what we would end up with.”

Four-time and defending Brickyard winner Jimmie Johnson will start alongside Newman in the front row after posting a fast lap of 187.438 in the No. 48 Lowe’s/Kobalt Tools Chevrolet. The Brickyard 400 pole-sitter in 2008, Johnson will make his third career front-row start at Indianapolis on Sunday.

Jeff Burton, Gordon, Bobby Labonte and Mark Martin each extended their streak of starting in every Brickyard 400. All four drivers will make their 20th consecutive start in this event Sunday.

AJ Allmendinger qualified 14th and joins Juan Pablo Montoya, Scott Pruett and Max Papis as drivers who have started in the Indianapolis 500, Brickyard 400 and Brickyard Grand Prix races at IMS. 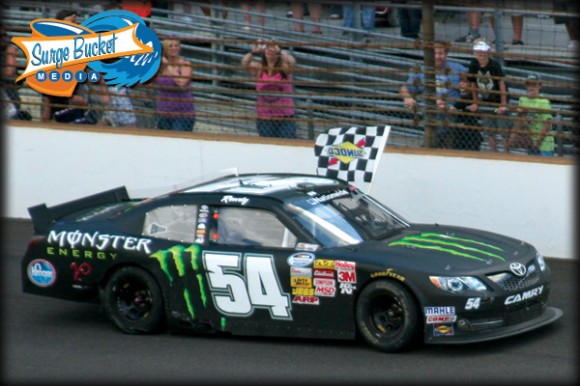 Kyle Busch captured his first victory at the Racing Capital of the World by winning the second annual Indiana 250 on Saturday, July 27 at the Indianapolis Motor Speedway.

Busch dominated the race in his No. 54 Monster Energy Toyota by leading 92 of 100 laps in winning his record 59th NASCAR Nationwide Series race in 259 starts. This was Busch’s fifth victory from the pole this season, breaking a single-season record for wins from the pole.

As dominant as Busch was throughout the day, he faced a strong challenge late in the race from Brian Scott in the No. 2 Shore Lodge Chevrolet, who passed Busch in Turn 2 on a Lap 95 restart. Busch fell to third place during Lap 96 when he was passed by Joey Logano in the No. 22 Discount Ford.

Busch passed Logano for second place on Lap 97 before overtaking Scott on the back straightaway for the lead on Lap 98. Busch extended his lead in the final two laps in taking the checkered flag and the win by 2.142 seconds over Scott, with Logano finishing third in the No. 22 Discount Tire Ford.

“It’s Indianapolis,” Busch said. “It’s pretty awesome to be able to win here. It’s cool to win at this place with the history, with all the automobiles that have raced on this surface.”

Brian Vickers drove his No. 20 Dollar General Toyota to a fourth-place finish in winning the Indianapolis Dash 4 Cash and a check for $100,000. Kevin Harvick finished fifth in his No. 21 Hunt Brothers Pizza Chevrolet.

2006 Indianapolis 500 winner Sam Hornish Jr. placed 34th, out of the race after completing 64 laps due to overheating. It was
Hornish’s worst finish of the season and only the second time he wasn’t running at the finish. Hornish dropped from the Nationwide Series points lead to fourth after today’s race.