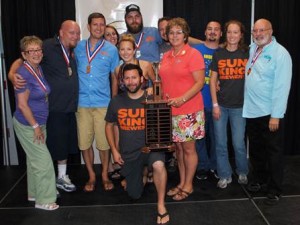 Indianapolis’ own Sun King Brewery claimed the Brewers of Indiana Guild Championship Brewery Trophy during theIndiana State Fair Brewers’ Cup competition over the weekend.  Sun King earned the title after receiving the most points of the 31 professional breweries entered in the 23 different categories of beer, which included four first-place beers.

The other big award handed out was the professional Best of Show trophy, going to the highest-rated of the 23 gold medal winners.  For the third straight year, that award went to Upland Brewing Co. for its Helios Pale Ale.

Tim Palmer, Fishers, swept the home brew awards winning “Home Brewer of the Year” by finishing first in four different categories.  Palmer also took home the award for home brewers’ Best of Show trophy with his “A Noble Daughter” pilsner beer.  As a result, Palmer will have his winning recipe brewed and served at the Broad Ripple Brew Pub.

The Home Brew Club of the Year went to Foam Blowers of Indiana, an AHA (American Homebrewers Association) sanctioned club that was found in the 1980s and is based in the Indianapolis area.

More than 80 judges from all over the country tasted and rated the beers over two days.  Silver and bronze medals were also awarded in each of the categories, which range from American Ales to Spice/Herb/Vegetable beer.  All the winning beers will be on display in the DuPont Food Pavilion during the Indiana State Fair, Aug. 2 – 18.

The Indiana State Fair Brewers’ Cup is a qualifying event for the Masters Championship of Amateur Brewing (MCAB); meaning first-place winners in each of the 23 different homebrew categories are qualified to compete in the MCAB championship competition.