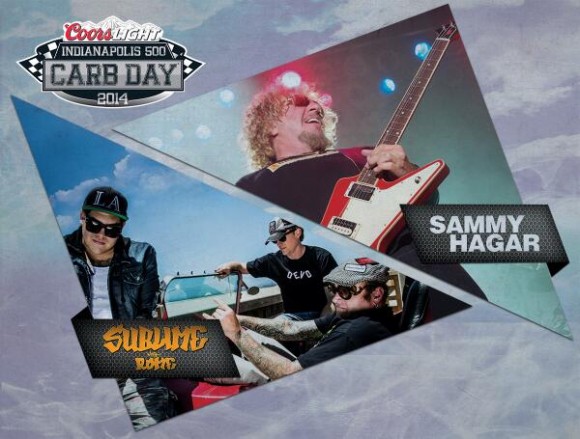 The Indianapolis Motor Speedway today announced that Rock & Roll Hall of Famer, Sammy Hagar and the reggae rock trio Sublime with Rome will headline the Coors Light Carb Day concert on Friday, May 23. The concert is set to deliver an exciting mix of rock, reggae, alternative rock and hip hop.

The thrilling double bill concert featuring The Red Rocker Sammy Hagar and The Wabos and Sublime With Rome is free with a Coors Light Carb Day admission of $30. The concert will take place on the new Turn 4 Coors Light Stage in the IMS infield. Coors Light Carb Day tickets are available at www.ims.com/carbday.

Sammy Hagar, also known as The Red Rocker, is a Grammy award-winning vocalist, guitarist, songwriter and musician, who in 2007 was inducted into the Rock and Roll Hall of Fame as a member of Van Halen. From breaking into the industry with the seminal hard rock band Montrose to his multiplatinum solo career and his ride as the frontman of Van Halen, he’s set the tone for some of the greatest rock anthems ever written—with songs like “I Can’t Drive 55,” “Rock Candy,” “I’ll Fall in Love Again,” “There’s Only One Way to Rock,” “Your Love Is Driving Me Crazy,” “Finish What Ya Started”  “Right Now” and “Why Can’t This Be Love.” Throughout his prolific 40-year-career, Hagar’s solo and group albums have globally amassed 25 Platinum certifications on sales surpassing 40 million.

In 2009, Hagar formed the supergroup Chickenfoot with bassist Michael Anthony (ex–Van Halen), guitarist Joe Satriani and drummer Chad Smith (Red Hot Chili Peppers). The band’s self-titled debut album was certified gold and their subsequent tours were lauded by both fans and critics. In 2011, with the release of his critically acclaimed autobiography, “Red: My Uncensored Life In Rock,” he became a No. 1 New York Times Best Selling Author. Hagar is also a successful restaurateur and pioneer in the now popular celebrity spirit trend.

Formed in 1988 by bass player Eric Wilson and front man Bradley Nowell in Long Beach, Calif., Sublime delivers an irresistible blend of ska, reggae, punk, surf rock and hip hop.  Over the course of its three albums – 1992’s double-platinum “40oz. to Freedon,” 1994’s gold “Robbin’ the Hood,” and 1996’s six-time platinum self-titled major-label debut – the band has sold more than 17 million albums worldwide. Nowell died of a heroin overdose two months prior to the release of “Sublime,” which reached No. 13 on the Billboard Top 200, sold six million copies and spawned such hits as “What I Got,” “Santeria” and “Wrong Way,” which remain radio staples across the country.  Profoundly affected by Nowell’s death, Wilson never considered performing the group’s music live without his partner until he met Rome Ramirez, a then 23-year-old gifted songwriter and musician.

Growing up in the San Francisco Bay Area, Rome was introduced to Sublime’s music by his uncle, and credits the band with inspiring him to first pick up a guitar and learn to play at age 11. Rome began singing and writing songs as a teenager and was playing solo gigs around the Bay Area when he met Wilson while the two were recording at the same studio.

An instant friendship and musical bond was formed and their first big show as Sublime with Rome came in October 2009 at Cypress Hill’s annual Smokeout Festival. A sold-out tour in March 2010 followed with spontaneous sing-alongs and mosh pits at every stop. That fall, Sublime with Rome entered the studio to begin recording their debut album.

The result was “Yours Truly,” released in the summer of 2011. The album, produced by Paul Leary, both picks up where Sublime left off and builds on what they’ve accomplished, thanks to the fresh infusion of energy from Rome, who brought in lyrics, melodies and chords he’d written over the past few years. Songs like first single “Panic” (a top-five modern rock hit), “Take It Or Leave,” and “You Better Listen” are reminiscent of vintage Sublime, while songs like “Lover’s Rock” and “Murdera” pick up on the reggae dancehall style the band had begun exploring in 1996. “Paper Cuts” has a distinct punk flavor, while “PCH” and “Spun” have more of a rock-pop feel.

Joined by celebrated drummer and longtime friend Josh Freese, Sublime with Rome tours the world in treating fans to both new songs as well as Sublime favorites that many never had a chance to previously hear live.

The Coors Light Carb Day Concert featuring The Red Rocker Sammy Hagar and The Wabos and Sublime With Rome will be the finale of an action-packed day at IMS. Also scheduled are the final practice for the 33 starters in the 98th Indianapolis 500 Mile Race, the Indy Lights Freedom 100 race and the popular Indy 500 Pit Stop Challenge.