You are here: Home / Greater Indianapolis / Line up Announced for the 2014 IPL 500 Festival Parade 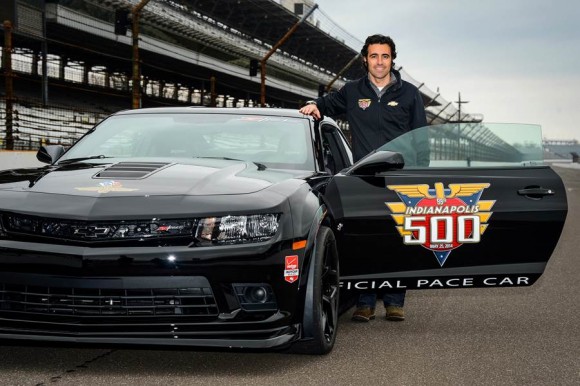 The IPL 500 Festival Parade, scheduled for Saturday, May 24 at noon in downtown Indianapolis, will once again feature a diverse line-up of celebrities. The legendary Jim Nabors will be the Honorary Grand Marshal and Michael Feinstein and Ronan Tynan will headline the Parade’s opening entertainment. US Olympians Gracie Gold, Nick Goepper and Steve Langton, Andrew Luck, Florence Henderson and Bobby “Slick” Leonard, are among the celebrities and VIP’s scheduled to participate in this year’s celebration. Also appearing will be the 33 starting drivers of the 2014 Indianapolis 500®, as well as Indianapolis 500® winners Dario Franchitti and Mario Andretti.

Andrew Luck is an NFL quarterback for the Indianapolis Colts. Luck was a star quarterback at Stanford University, and was drafted number one overall in the 2012 NFL Draft by the Colts. In his first two seasons as the Colts QB, Luck has led them to the playoffs both years including one divisional title in 2013.

Bobby “Slick” Leonard is a 2014 Naismith Memorial Basketball Hall of Fame inductee. Leonard was the head coach for the Indiana Pacers for 12 years, winning 3 ABA Championships. As a player, Leonard was a 2-time All-American at Indiana University and captain of the 1953 NCAA Championship team. He went on to play seven seasons in the NBA. He currently is the Pacers color analyst for their radio broadcast.

Dario Franchitti is a three-time Indianapolis 500 Champion. He won four IndyCar Championships from 2007-2011. He will become the 14th former winner of the ’500′ to drive the pace car for the “Greatest Spectacle in Racing.”

Mario Andretti is the 1969 Indianapolis 500 Champion. He is one of only two drivers to win races in Formula One, IndyCar, World Sportscar Chmapionship and NASCAR. He was the only person to be named United States Driver of the Year in three decades (1967, 1978, and 1984). Mario won the Indy Car National Championship four times and was named the Associated Press Driver of the Century in January, 2000.

Gracie Gold is the reigning U.S. Figure Skating Champion and a bronze medalist in the Team Event at the 2014 Sochi Olympics. Gracie, who is just 18 years old, already has a gold (2014) and silver (2013) medal in the U.S. Championships and a silver medal at the 2012 World Junior Championship.

Nick Goepper, from Lawrenceburg Indiana, is the #1 ranked freeskier in the world. He recently earned a Bronze Medal at the 2014 Olympic Games in Sochi, Russia for the Slopestyle event. Nick, at only 19 years old, also has two Gold and one Silver medals at the Winter X Games.

Steve Langton is an American Bobsledder. He earned two medals in the two-man and four-man bobsleigh competitions at the 2014 Sochi Winter Olympics. He also has two gold and two bronze medals in the World Championships.

Nick Ziobro was the winner of the 2012 Great American Songbook High School Vocal Academy Competition. He has received praise from The New York Times, LA Weekly and Edge Los Angeles raving about his potential and bright future. In 2013, he was selected to compete as a finalist in the Noel Coward Carbaret Award in New York City.

Captain Andrew D. Fisher of the U.S. Army is from Bloomington, Indiana. His current position is a Physician Assistant for the 1st Battalion, 75th Ranger Regiment. He is stationed in Fort Benning, Georgia and has served his country for 18 years.

Sgt. First Class Cory Jacob Remsburg served as an Army Ranger in Afghanistan in 2009. He was injured by a roadside bomb that put him into a coma for more than three months. He is partially paralyzed on his left side and blind in his right eye. He has went through years of rigorous rehabilitation and now lives at home in Phoenix, Arizona.

General Frank J. Grass is the 27th Chief of the National Guard Bureau. He serves as a military adviser to the President, Secretary of Defense, National Security Council and is the Department of Defense’s official channel of communication to the Governors and State Adjutants General on all matters pertaining to the National Guard.

General R. Martin Umbarger is The Adjutant General of Indiana. As The Adjutant General, his primary focus is to lead the Indiana Army and Air National Guard, the Indiana Guard Reserve and state employees all totaling more than 15,800 personnel. Prior to his current assignment, Maj. Gen. Umbarger served as the deputy commanding general for the reserve component, U.S. Forces Command.

Mayor Greg Ballard is the 48th Mayor of Indianapolis. Mayor Ballard served for 23 years as a U.S. Marine and is a Persian Gulf War Veteran. He was awarded with the Legion of Merit. Ballard is a native Hoosier raised on the east side of Indianapolis and graduated from Cathedral High School.

Governor Mike Pence is the 50th governor of Indiana. Governor Pence is a native Hoosier who was born in Columbus, Indiana. He previously served as a member of the United States House of Representatives and as Chairman of the House of Republican Conference. He is in his first term as the Indiana Governor.

Cole Hauser is an actor who had his big screen debut in School Ties in 1992. He is best known for his role as Billy McBride in Good Will Hunting. He has been in other feature films including Dazed and Confused and Tears of the Sun. In 2014, Cole was in Transcendence and will star in DirecTV’s original drama, ROGUE, which debuts on May 28th.

Florence Henderson is an actress and singer best known for playing the role of Carol Brady in the television program The Brady Bunch. Since the mid-1990s, Henderson has performed the song “God Bless America” at the Indianapolis 500® accompanied by the Purdue University “All-American Marching Band.” Since 2008, Henderson has hosted the TV talk show The Florence Henderson Show.

Cesar Millan is a renowned dog behavior expert commonly known as the “Dog Whisperer.” He is a New York Times best-selling author and has his own show, ”Cesar 911.” Millan has been recognized with numerous awards throughout his career, including Emmy nominations in 2006, 2007 and 2009 for Outstanding Reality Program.

There are more than 300,000 spectators who are expected to line the two-mile Parade route and will get a glimpse of these celebrities, the 33 starting drivers of the 2014 Indianapolis 500 ®, more than 70 specialty units, floats, marching bands and entertainment groups and giant inflatable balloons.