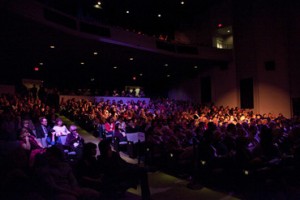 The rekindling of long lost love, odysseys across wild landscapes and adventures to uncover hidden treasures are a few of the incredible journeys found in the IMA’s sixth annual Winter Nights Film Series, themed Lost and Found for the 2015 season.

Attendees are invited to experience films about losing your way and discovering what’s truly important in life. All films, unless otherwise noted, are screened in 35mm. Before the show, guests can enjoy special programming in The Sutphin Fountain Room beginning at 6 p.m. Films begin at 8 p.m. in The Toby, unless otherwise noted.

January 2
O Brother, Where Art Thou? (2000, dirs. Joel and Ethan Coen, 106 mins., PG-13)
In this visually stunning, comedic retelling of Homer’s Odyssey, three prisoners escape from a Mississippi chain gang and embark on an adventure to reclaim a buried treasure. Come early to enjoy a pre-show bluegrass performance in The Sutphin Fountain Room.

January 9
The Wizard of Oz (1939, dir. Victor Flemming, 102 mins., PG)
Join Dorothy and Toto in search of the Wizard—and the way back to Kansas— in this Technicolor gem. Before the film, sync up this classic to Pink Floyd’s The Dark Side of the Moon.

January 16
Spirited Away (2001, dir. Hayao Miyazaki, 125 mins., PG)
In this Oscar-winning Miyazaki masterpiece, a young girl must rescue her parents and find a way home after they become trapped in a magical world. This film is in Japanese with English subtitles. Before the film, join a session of the IMA Drawing Club.

January 23
Fargo (1996, dirs. Joel and Ethan Coen, 98 mins., R)
Bundle up for this special outdoor screening in the IMA Amphitheater! In deep financial trouble, Jerry plots to have his wife kidnapped and ransomed to her wealthy father. Jerry’s situation goes from bad to worse as the inept criminals he hires make mistake after mistake. Show proof you have lived in Minnesota or North Dakota and receive half price admission and VIP seating to the show. This film will be shown in Blu-ray.

January 30
A Hard Day’s Night (1964, dir. Richard Lester, 87 mins., NR)
Filmed just one month after the Beatles exploded into the U.S. on The Ed Sullivan Show, A Hard Day’s Night reconceives the movie musical and captures the moment when John, Paul, George and Ringo became icons of their generation. This 50th anniversary restoration will be screened in Blu-ray. Before the film, test your music knowledge with a round of trivia.

February 13
An Affair to Remember (1957, dir. Leo McCarey, 119 mins., NR)
In this iconic and inspiring love story, playboy Nickie and singer Terry fall in love aboard a cruise. Already engaged to other people, the lovers decide to meet six months later at the Empire State Building. Capture the aura of romance with a love letter workshop before the film.

February 20
Peter Pan (1924, dir. Herbert Brenon, 105 mins., NR)
Peter Pan chases his shadow into the Darling children’s bedroom and sweeps them off to Never Never Land where they face off with Captain Hook and his pirates. The orchestral score by Dr. Phillip Carli will be expanded in this premiere performance with the Indianapolis Chamber Orchestra. Tickets for this special screening are $30 for the public and $25 for IMA members.

February 27
Monty Python and the Holy Grail (1975, dirs. Terry Jones and Terry Gilliam, 91 mins., PG)
King Arthur and his knights have been tasked by God to find the Holy Grail; however, they struggle to fulfill the mission as they encounter obstacles ranging from a cow-tossing Frenchman to a killer rabbit. Create your own chalice, shield or wooden rabbit before the show.

Tickets and Parking
Tickets for the 2015 Winter Nights Film Series are $9 for public and $6 for members, unless otherwise noted. Season packages are available for $71 for the public and $51 for IMA members.

Tickets can be purchased in advance at the IMA Welcome Center, online or by calling 317-955-2339. Tickets are also available at the door, but are not guaranteed, as some films may sell out before the day of showing. Tickets go on sale Nov. 1. All tickets are non-refundable.

Parking in the main lot and underground garage is free for IMA members and $5 for the public. Outlying parking spots are free to everyone.