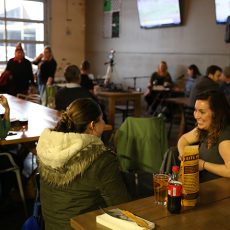 Everyone knows the name Albert Einstein, but do you know his story? Join the discussion with Dr. Andy Gavrin, Ph.D., Department of Physics at IUPUI, as we talk about the settings in which Einstein developed some of the most important theories in modern physics. Einstein didn’t live in a vacuum, so we’ll discuss topics such as what was going on in the field of physics at the time, other major players in the field, the role his wife had in helping him develop his theories, and how his work has impacted the world since.