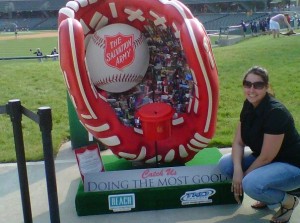 Back in February when The Salvation Army team met with the Indianapolis Indians, this “glove thing” we talked about was months away…  Two sponsors, lots of paint, tons of pictures, and several meetings later, we finally have a finished project:  A five foot tall glove that could help The Salvation Army win $10,000. Thanks to […]

The economy in recent years has been less than stellar. Many people have lost their jobs. Lost their savings. Lost their cars. Lost their houses. And some have even lost their businesses. Enough is enough. We must help each other.