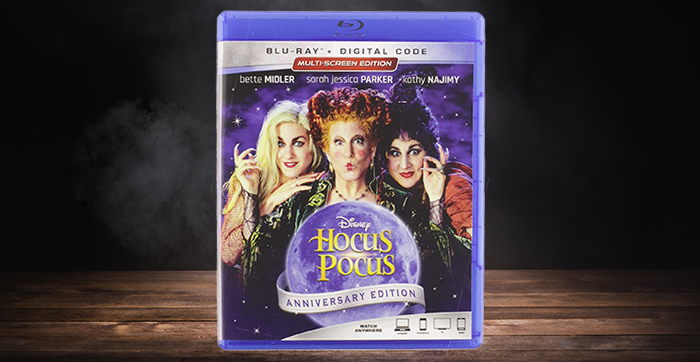 Disclosure: We receive an affiliate commission if you purchase items through our Amazon link.

In Disney’s HOCUS POCUS, Academy Award(R) nominee Bette Midler (Best Actress, 1991, FOR THE BOYS), stars with Sarah Jessica Parker (SEX AND THE CITY) and Kathy Najimy (THE WEDDING PLANNER) as three wild witches who return from seventeenth-century Salem for a night of zany fun and comic chaos.

After they’re conjured up by unsuspecting pranksters, the tricky trio sets out to cast a spell on the town and reclaim their youth. But first, they must outwit three feisty kids determined to foil their scheme! Filled with bewitching laughs and magic, this hilarious film is perfect for the whole family!|Producer David Kirschner came up with the idea for the movie one night while he and his young daughter were sitting outside and his neighbor’s black cat strayed by. Kirschner began to unspool a narrative of how the cat was once a boy who was changed into a feline 300 years ago by three witches.|Actress Kathy Najimy described her character Mary as “Eddie Haskell as a witch,” referring to the character on the classic TV series “Leave It To Beaver.” “She sucks up to Winifred [Bette Midler’s character] every chance she gets. She wants to be part of the power club and Winifred’s got the power.”|To create the costumes, designer Mary Vogt read many historical books about Salem, Massachusetts. “I even read diaries of women who were hanged as witches,” she says.