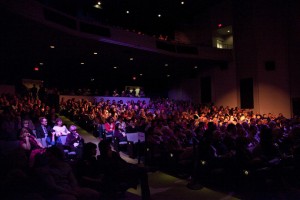 The Indianapolis Museum of Art (IMA) announces its fifth annual Winter Nights film series. From January 3 to February 28, 2014, movies will be shown every Friday beginning at 7 p.m.

Held in the The Toby, the annual indoor film series provides attendees a much needed escape from the cold while they cozy up and enjoy classic film. This year, movies focus on quirky, heart-warming comedies with razor-sharp dialogue and slapstick shenanigans. All films are shown in their original 35 mm format.

For a special Valentine’s Day screening, the Indianapolis Chamber Orchestra will perform the score for The Strong Man (1926), the first feature-length film directed by Frank Capra. This film begins at 7:30 p.m.

The Thin Man (1934, dir. W.S. Van Dyke, 91 mins., NR)
Friday, January 3
Sipping martinis like water and trading one-liner’s like a game of hot potato, Nick and Nora Charles (William Powell and Myrna Loy) will have you rolling in the aisle in this light-hearted whodunit.  Egged-on by Nora,  former detective Nick comes out of retirement to find missing inventor and suspected murderer, Clyde Wynant. Shot in a mere two weeks, the film was so successful it launched a series of six films over the next thirteen years.

Some Like It Hot (1959, dir. Billy Wilder, 120 mins., NR)
Friday, January 10
After witnessing the St. Valentine’s Day Massacre, musicians Joe and Jerry (Tony Curtis and Jack Lemon) flee Chicago by disguising themselves as women and joining an all-girl orchestra.  Complications arise when Joe falls for the band’s lead singer, Sugar Kane Kowalczyk (Marilyn Monroe), and creates another identity,an oil tycoon,to seduce her.  All the while Jerry, dolled up as Daphne, has found a millionaire of his own and the mob is hot on their trail.Featuring Oscar-winning costumes by Orry-Kelly.

Father Goose (1964, dir., Ralph Nelson, 118 mins., NR)
Friday, January 17
Set during WWII, beachcomber Walter Eckland (Cary Grant) is convinced to live on an isolated island and report Japanese air activity.  When he unwittingly comes to the rescue of French schoolmistress Catherine (Leslie Caron) and her seven young charges, Eckland realizes his peaceful isolation is at an end as he is forced into sobriety and out of his hut.  It seems that Catherine and Walter will never get along, until Japanese soldiers arrive on the island and the two are forced to work together to save the girls.

Manhattan (1979, dir. Woody Allen, 96 mins., R)
Friday, January 24
Isaac is dating Tracy after divorcing Jill, who has moved in with Connie and is writing a book about their failed marriage. Yale is happily married to Emily and happily dating Mary. So goes the modern mating dance in Manhattan, until Isaac falls for Mary and struggles to face his emotions. Stunning cinematography by Gordon Willis and a soundtrack featuring George Gershwin will make falling in love in Manhattan easy to do.

Raising Arizona (1987, dirs., Joel Coen and Ethan Coen, 94 mins., PG-13)
Friday, January 31
After discovering that they cannot conceive a child, ex-con H.I. (Nicholas Cage) and ex-cop Edwina McDonald (Holly Hunter) decide to help themselves to one of the Arizona family’s newborn quintuplets.  With the police, a bounty hunter and H.I’s prison buddies all on the search for the missing quint, the couple struggles to keep their secret and their sanity. Outrageous, wild and heart-warming, Raising Arizona is the second feature-length film by the Coens and certainly one of the funniest.

Dr. Jack (1922, dirs. Fred Newmeyer and Sam Taylor, 59 mins., NR)
Friday, February 7
Country Doctor, Jack Jackson, has a knack for cheering up his patients without medicine. When one of his former patients asks him to help a friend, Dr. Jackson discovers the wealthy man’s daughter (Mildred Davis) isn’t an invalid, but a helpless victim of Dr. von Saulsbourg’s greed.  Sparks fly when Dr. Jackson and the girl accidentally kiss and he vows to rescue her from von Saulsbourg’s clutches. Musical accompaniment by Roger Lippincott.

The Strong Man with the Indianapolis Chamber Orchestra (1926, dir. Frank Capra, 75 mins., NR)
Friday, February 14
7:30 p.m.
$25 IMA member, $30 public, $12 student (17 and under)
The collaboration between the ICO and IMA continues with a Valentine’s Day screening of The Strong Man- the first feature-length film directed by Frank Capra. Paul Bergot (Harry Landon) becomes pen-pals with Mary Brown (Pricilla Bonner) during The Great War and quickly falls in love with her. Once the war is over, Bergot travels to America as the assistant to vaudevillian strongman “Zandow the Great” and begins his search for Mary. Will he ever find her? Kirk Trevor, conductor and Eric Grayson, projectionist.

Tillie’s Punctured Romance (1914, dirs. Mack Sennett and Charles Bennett, 82 mins., NR)
Friday, February 21
Considered the first ever feature-length comedy, Tillie’s Punctured Romance features Charlie Chaplin as a greedy philanderer.  Charlie meets Tillie while on the “outs” with his girlfriend, Mabel. When he realizes that Tillie’s father is well-off, he persuades her to elope, runs off with her money and Mabel. Returning for Tillie when she inherits her uncle’s fortune, Charlie tricks her yet again until Tillie and Mabel realize they are too good from Charlie and send him packing.  Musical accompaniment by Roger Lippincott.

Steamboat Bill, Jr. (1928, dirs. Charles Reisner and Buster Keaton, 70 mins., NR)
Friday, February 28
In the town of River Junction, Captain William Canfield’s old paddle steamer has seen better days.  Canfield hopes the arrival of his son, William Canfield Jr. (Buster Keaton), will help him compete with rival James King’s new passenger ship.  Willie disappoints his father, not only with his lack of strength but with his budding relationship with King’s daughter Kitty. Canfield and King resolve to break-up the each other’s businesses and young lovebirds, but when a hurricane reaches River Junction a daring rescue by Willie brings the group together.  Steamboat Bill, Jr. features Keaton’s single most famous stunt- narrowly dodging a falling building- during the cyclone scene.  Musical accompaniment by Dr. Philip Carli.

Winter Nights film series ticket prices are $5 for IMA members and $9 for the public, unless otherwise noted. Tickets are available for purchase at the door, in advance at http://www.imamuseum.org/events-programs/films/winter-nights or by calling 317-955-2339. Tickets are non-refundable.

Parking in the main lot and underground garage is free for IMA members and $5 for the public. Outlying parking spots are free to everyone. Concessions and cocktails will be available in The Toby lobby until 8 p.m.