You are here: Home / Sports / New ECHL team to play in renovated Coliseum beginning in 2014 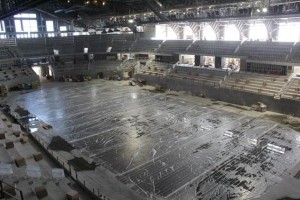 Professional hockey is coming back to the Indiana State Fairgrounds!  The Indiana State Fair Commission has approved an agreement with Indiana Hockey Club, LLC, an ECHL expansion franchise that will become an anchor tenant for the fairgrounds’ newly renovated Coliseum and begin playing its home games there in October 2014.  The two organizations have signed a five-year deal that also calls for the team to house its administrative offices at the fairgrounds.

Carmel businessman Jim Hallett, the chief executive officer and director of KAR Auction Services, one of North America’s largest automotive remarketing companies, is the chairman of Indiana Hockey Club, LLC and no stranger to hockey.  He is a lifelong fan, former player and former team owner.

“Professional hockey is back in Indy, and we can’t wait to drop the puck,” Hallett said.  “We have a great partnership with the Indiana State Fair Commission and a beautiful new arena that will be one of the premier hockey venues in the Midwest.  We’ll offer affordable family fun and a competitive brand of hockey that hasn’t been seen here since the Indianapolis IHL team that played in Market Square Arena in the 1990s. We are already busy assembling a first class organization, and look forward to sharing our progress as we build toward the 2014 season.”

The Coliseum Complex is in the final months of a $63 million renovation that will modernize the entire arena with new lighting, a two-tiered seating bowl, a digital overhead scoreboard, state of the art sound equipment and ample ADA seating.  It will accommodate about 6,200 fans for hockey and is scheduled to reopen in April, 2014.

“This deal makes perfect sense for us and we’re happy to have it done before the building opens next spring,” said Indiana State Fair Commission Chairman Andre Lacy.  “I remember going to Capitals games in the Coliseum as a boy eager for a puck to come my way, so bringing pro hockey back to the fairgrounds is especially gratifying to me personally.”

The State Fairgrounds has been the hub of Indianapolis’ long hockey history dating back to 1939 when the Coliseum first opened and the Indianapolis Capitals began the first of their 13 seasons in the International American Hockey League.  The building subsequently housed the Indianapolis Chiefs, Racers, Checkers and Ice for various durations in a variety of professional leagues from 1955 – 2004.  The Indiana Ice, an amateur team playing in the United States Hockey League, called the Coliseum home from 2004 – 2012 when the renovation began but ultimately decided not to return to the Coliseum after the renovation is completed.

That decision eventually led the commission to Hallett and the ECHL.  Hockey’s premier “AA” league, the ECHL not only offers Ft. Wayne as a natural regional rival, but it also has franchises in nearby Evansville, Cincinnati and Toledo.  Overall, it currently has 22 teams located throughout the country and is responsible for sending more than 500 players to the National Hockey League since its inception in 1988.

“Indianapolis has an international reputation as a great sports town, and we’re confident it will once again be a great hockey town,” said ECHL Commissioner Brian McKenna.  “With an exceptional ownership group led by Jim Hallett, a brand new venue and a proud hockey tradition, we couldn’t be happier to expand the ECHL to Central Indiana.”

The ECHL has long been known for its high quality hockey that is also an affordable family experience.  A recent survey commissioned by the State Fairgrounds indicates great public support for affordable, family friendly pro sports events in the new Coliseum, which has everyone involved excited about the new team’s long term outlook.

“I spent many years watching my son’s hockey games in the Coliseum and know what a devoted fan base there is for hockey and the Coliseum,” said State Fairgrounds Executive Director Cindy Hoye. “To have a brand new professional team ready to reenergize these fans inside a first-class facility that is still connected to its 75-year history is going to be fun.”

The hockey club is the second team to announce a deal to play in the renovated Coliseum.  Earlier this year, the IUPUI Jaguars announced a five-year agreement to play all its men’s and selected women’s basketball games in the arena.  The hockey team will unveil additional details at a press conference on November 26 at 11 a.m., including information on the lottery process for selecting season tickets for the club’s inaugural season.