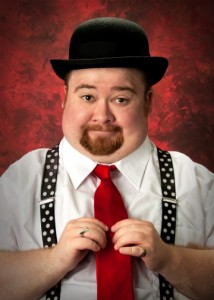 At a recent magic convention in Las Vegas, a performer stepped on stage, and a legend was born.

Imagine a man who’d never been on a plane before and never had been in Las Vegas. He had worked many long hours with Joanie Spina, former director for David Copperfield, to create a world class show. His act had been reborn. And when Patrick Thernes from Cincinnati, finished his show, he got standing ovations, praise from Lance Burton and Mac King, and ended up getting an engagement at the world famous Magic Castle.

This is Sir Pat-Trick, and his last stop before Hollywood is Indiana at Indy Magic Monthly on Dec. 3rd. Don’t miss it!

The show will also feature Cody Comet, an up and coming magician from Louisville. Comet, ajunior at U of Louisville, has a story to tell and magic to tell it with.
As an autistic person, he’s used magic to help him achieve what others only wish they could. With bookings in comedy clubs, magic shows in Chicago, Louisville and Indy, and doing benefits for The Special Olympics, Comet has received standing ovations wherever he plays.
Indianapolis’ own master of sleight of hand, Corbett Troyer joins the show as well. Troyer has been a fixture on the Indiana magic scene for many years, and he always shows his audiences his mastery of the impossible.
The entire evening will be emceed by Taylor Martin as Rodney The Elder, Escamoteur and Conjurer. As usual, the evening of entertainment, known as Indy Magic Monthly, will again leave you astonished.