It will be a histor 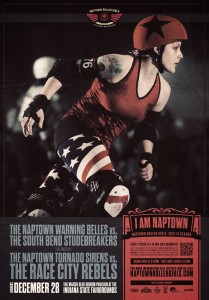 ic battle for the city and state December 28th, as the Naptown Roller Girls kick off their eighth home season at the Marsh Blue Ribbon Pavilion at the Indiana State Fairgrounds.

The roller derby double-header kicks off with the Naptown Warning Belles taking on the South Bend Roller Girls.  This will be the first time these two teams have met.  The second bout will pit two hometown teams against each other – the Tornado Sirens will battle the Race City Rebels, Indianapolis’ premiere men’s derby team.

“While the two teams have never played each other publicly, they have scrimmaged against each other at practice,” says Naptown league spokeswoman Devon Dean (“Peyton Slamming”).  “Men’s derby is growing in popularity all the time and Race City provides a strong opponent for us to kick off the season!”

Doors open at 5:30 p.m., with the first bout starting at 6:00 p.m.  The second bout will start at approximately 7:30 p.m. That night will also usher in a new era for NRG, with many new faces on both the Warning Belles and Tornado Sirens. Partial proceeds from the bout will go to the National Kidney Foundation.  Naptown is proud to support NKF, including having two kidney donors in our ranks.