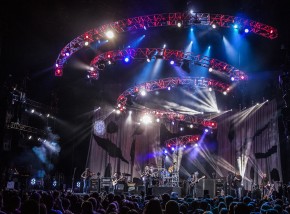 In 2013, Rolling Stone put Dave Matthews Band on its list of the “50 Greatest Live Acts Right Now,” observing, “Two decades in, DMB still know how to surprise their fans.” The group’s 2014 North American summer tour may be its most surprising yet.

“A Very Special Evening with Dave Matthews Band” will feature the group delivering two sets per evening, performing songs from throughout its career. Dave Matthews Band will wind through numerous configurations – from electric to acoustic, from full-throttle numbers featuring the entire band to more intimate moments featuring small groups of band members – including a stripped-down pairing of Matthews with guitarist Tim Reynolds, performing as an acoustic duo, as they occasionally do when the band is off the road. A variety of guests will join the band throughout the summer.

“I was talking to Carter about how much I still like just sitting around playing music together. It’s how we started – in the basements of Carter’s and my mom’s houses,” says vocalist/guitarist Dave Matthews. “Our shows are loose, but we started thinking that maybe this summer we should make them looser and bring some of that feeling to the stage. It seems like the opposite of a safe plan, so why not?”

“Everyone was really psyched about the idea, so we’ve been busy figuring out how to turn it into the best possible experience for our fans,” says drummer Carter Beauford.

The extensive North American outing will kick off on May 16 at Cynthia Woods Mitchell Pavilion in Woodlands, TX and include two-night stands in Saratoga Springs, NY, Camden, NJ, Noblesville, IN, Chicago, IL, Hartford, CT and West Palm Beach, FL. Dave Matthews Band will launch the West Coast leg with three consecutive nights at the Greek Theatre in Berkeley, CA (August 22-24). The group will headline The Gorge Amphitheatre in George, WA on August 29-31 in its traditional Labor Day weekend stint. This year’s shows at The Gorge will also feature a Caravan stage with performances by additional artists.

An online presale for all shows will begin on Thursday, January 16, at 10:00 AM ET at www.warehouse.davematthewsband.com for members of the DMB Warehouse Fan Association. Citi is the official credit card of the Dave Matthews Band Summer 2014 Tour. Citi cardmembers will have access to presale tickets through Citi’s Private Pass Program beginning on Monday, February 3, at 10:00 AM local time for all shows except the August 29-31 dates, which will be available beginning on Monday, February 17, 10:00 AM local time. For complete presale details visit www.citiprivatepass.com.

“The only reliable Dave Matthews Band set list is a dart board with the group’s entire 22-year-old discography. And that, my friends, is a good thing – for the fans and the band,” said Cleveland’s Plain Dealer. “Each night is a new night, a new beginning for us all…Like life, which really has no straight roads, a DMB show is a journey down twisting and turning byways. The difference is that there are no speed bumps, no orange barrels, but there ARE plenty of fascinating side roads.”

Dave Matthews Band has sold a collective 37 million CDs and DVDs combined. The group has teamed up again with Rob Cavallo, who produced 2009’s Big Whiskey and the GrooGrux King, to record a new album that will be released later this year. With Away From The World entering the Billboard 200 at No. 1 in 2012, Dave Matthews Band became the first group in chart history to have six consecutive studio albums debut atop the chart. The band ranked as the biggest ticket seller worldwide of the past decade and has sold over 19 million tickets since its inception.