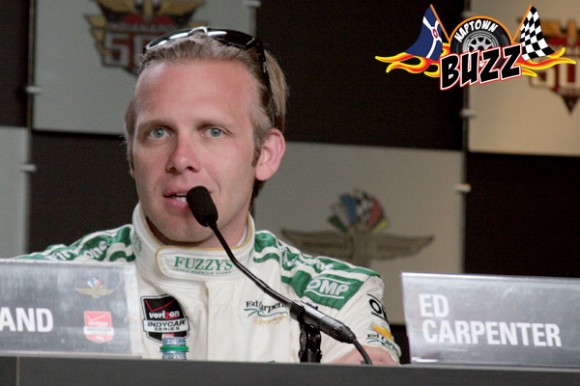 Ed Carpenter turned the fastest four-lap average speed in Round 1 of qualifications for the Indianapolis 500 Mile Race, but he’ll have to make another run May 18 to capture the Verizon P1 Award in the Fast Nine Shootout.

The Verizon IndyCar Series team owner/driver of the No. 20 Fuzzy’s Vodka/Ed Carpenter Racing Chevrolet recorded a four-lap average of 230.661 mph to lead the 10 entries that surpassed 230 mph — the first qualifiers above 230 mph since 2003 — during the qualifications format revamped for 2014 to emphasize two days of competition.

Round 1, which featured 71 qualifying attempts, set the 33-car field for the May 25 race. Qualifiers 10-33 from Saturday will make another four-lap run on Sunday to set their starting positions. The fastest nine qualifiers from Saturday will compete in Sunday’s Fast Nine Shootout, where they will vie for the pole and set the first three rows of the race.

Newgarden, in his third season with Sarah Fisher Hartman Racing, bumped Ryan Hunter-Reay from the fast nine with his run in the final five minutes of the session. Five different teams are represented in the Fast Nine Shootout.

Kurt Busch, who is seeking to be the fourth driver to compete in the Indianapolis 500 and the Coca-Cola 600 in Concord, N.C., in the same day, was 12th after his initial qualifying run (229.256 mph). With an hour to spare before having to leave for the evening all-star race at Charlotte Motor Speedway, Busch moved into the top nine (229.960) and departed by helicopter satisfied with the day’s efforts. By the time he landed, Juan Pablo Montoya had bumped Busch from the fast nine with a four-lap average of 229.966 mph. Montoya was summarily bumped by Andretti.