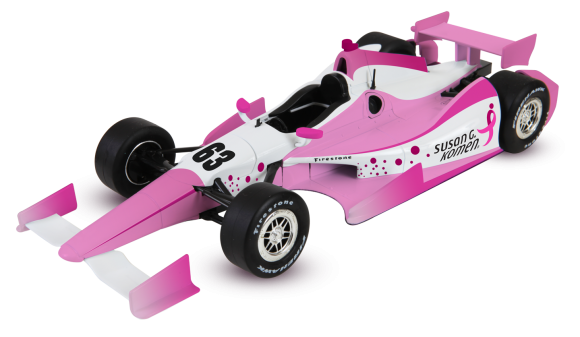 A cause-oriented idea sparked a promotional proposal mushroomed into a pink platform for Pippa Mann and the Susan G. Komen, the world’s leading breast cancer organization, for the Indianapolis 500 Mile Race onMay 25.

Mann will drive the pink and white Honda-powered No. 63 Dale Coyne Racing car in the 500 Mile Race, the British driver and Komen principals announced at the Indianapolis Motor Speedway, in a campaign to help raise funds and awareness throughout the month.

“Millions of people will see Pippa’s pink car and gear, bringing awareness about this very serious disease,” said Komen President and CEO Judy Salerno, M.D., M.S. “We’re so appreciative of Pippa’s commitment to her fans, and racing fans everywhere, and, especially, to the fight against breast cancer.”

The genesis of the Month of May program was Mann’s inclination of altering the primary color on her helmet to support breast cancer awareness.

“I’ve closely guarded my helmet design and colors. You don’t see me change often,” said Mann, who will don a pink firesuit, too. “I thought wouldn’t it be cool to change it for a really good cause and then donate it to (the Indianapolis Komen organization) after the race to auction. I’m really proud to be involved with this program and raise money for Susan G. Komen.”

A pledge site – www.racewithpippa.com — will be available through May 25.

Practice begins May 11, with qualifications May 17-18. Brandon Fry, who was Mann’s race engineer when she made her Indy 500 debut in 2011 with Conquest Racing, returns to oversee the program on the 2.5-mile oval. He’ll be joined by much of the crew from Muscle Milk Pickett Racing, which in mid-April withdrew from sports car competition.

“(2011) was a big year for me with one day of testing before we turned up,” Mann said. “The driver-engineer relationship is an important part in having a successful program. This will be my first time coming into the Indianapolis 500 that I’m not trying to learn a new car and new engineer.

“Dale Coyne Racing has an amazing crew coming on board to staff the No. 63 car, and I can’t thank Dale and the team enough for their support of this project, and for all the hard work they have also put into this behind the scenes. We will be out there not only racing for position, and competing in a classic racing sense against our competitors on track, but we will also be out there racing for the cure.”