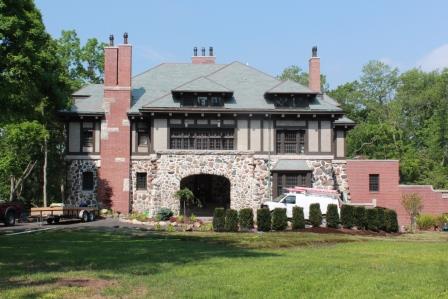 On June 28, the mansion that gave Golden Hill its name will open for a tour following a top-to-bottom restoration before the property goes on the market with a multi-million-dollar price tag,Auto visionary David M. Parry built the house in 1904, the first structure in what is now the Golden Hill Historic District. Indiana Automotive Heritage, an affinity group of Indiana Landmarks, will stage theJune 28 event at the 21,000-square-foot mansion restored by John and Eric Lethen of JERICO PropertiesDavid Parry made his fortune manufacturing carriages, owning one of the world’s largest carriage factories in the 1890s before he branched into automobiles. Beginning in 1907, he owned or was a partner or investor in companies that produced the Parry, the Overland, and the Pathfinder.Parry called his estate Golden Hill. In 1916, his family divided the vast property into building lots and used the same name for the residential development.  The Parry Mansion, 3650 Spring Hollow Road, was purchased in 1927 by William A. Atkins, an industrialist and owner of the Severin Hotel, whose family owned the property until the 1960s. Atkins altered and enlarged the house to its present size.The vacant and neglected mansion’s fate was a concern to neighbors and Indiana Landmarks until John Lethen of Jerico Properties bought the 4.5-acre property in 2012.“John Lethen is an experienced restorer of historic homes, and we’re glad he rescued the Parry Mansion,” says Marsh Davis, president of Indiana Landmarks. “He saved and repaired the original features, and at the same time he updated the kitchen, bathrooms and systems to meet the needs of modern living. For example, any cook would love to have a kitchen like one in the Parry Mansion.”The Golden Hill Historic District, listed in the National Register of Historic Places, is located just south of Woodstock Club and the Indianapolis Museum of Art, just west of Dr. Martin Luther King, Jr. Street. The elevated Parry Mansion site overlooks the Central Canal and White River.Indiana Automotive Heritage hosts the exclusive tour on June 28. The self-guided tour includes all three stories of the 21,000-square-foot structure, which is filled with carved wood, marble, and stone fireplaces, beautiful woodwork, window seats, balconies, a large deck, and rooms with views through leaded-glass windows. Light refreshments will be served.The event benefits the Indiana Automotive Heritage affinity group. Tickets to the event, held from 3 to 6 p.m., are $40 per person, with discounts for members of Indiana Automotive Heritage and Indiana Landmarks. Tickets must be purchased in advance online at parrytour.eventbrite.com or by calling Indiana Landmarks, 317-639-4534.