As the Indiana State Fair kicks off the ‘Year of the Coliseum’ today to celebrate the newly-renovated Fairgrounds landmark, the Coliseum’s new tenants added to the opening day festivities with a special announcement: The Indy Fuel, Central Indiana’s new professional hockey franchise, introduced its mascot and unveiled the team jersey to fans at noon at the Coliseum. 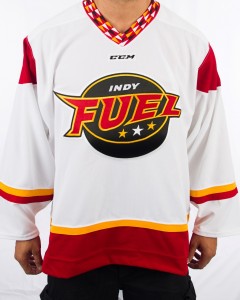 “Nitro,” a red dragon, will make the Coliseum its lair as the Fuel play 36 home games against ECHL foes starting this October. Fans helped name Nitro via social media, and when the beast isn’t guarding the team’s home ice at the Fairgrounds, he will serve as a community ambassador and make public appearances with youth groups, etc.

Team president Sean Hallett welcomed Nitro to the Fuel and also unveiled the official team jersey, available for purchase online at www.IndyFuelHockey.com and at the team store (‘The Garage’) at the Fairgrounds Coliseum.