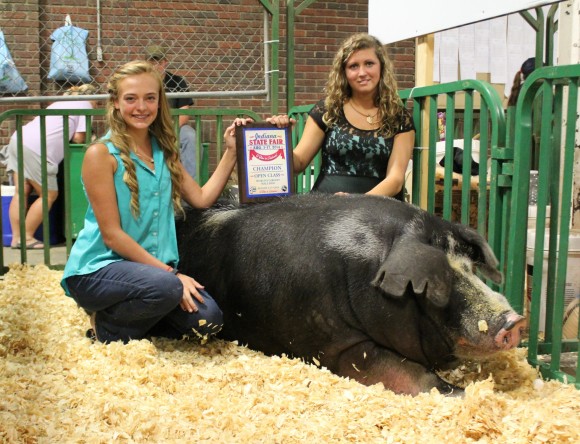 Two-and-a-half years ago David Lamb purchased a 10 pound hog that is not so little anymore. Spotosaurus Rex weighed in at 1,007 pounds tonight to claim the title of World’s Largest Male Hog at the Indiana State Fair. The hog belongs to the Woodward and Lamb families from Carroll County.

Lamb has a history of success at the Indiana State Fair World’s Largest Hog Competition. In 1988, he placed second in the competition losing by only 5 pounds. The Woodward and Lamb families continued this legacy earlier this evening when the 2 year-old Spotosaurus Rex won Grand Champion.

There were two other hogs entered in the competition. A&H Showpigs from Crothersville placed second with an 888 pound hog named Junior. Terry Mellencamp and Trenton Collins placed third with their 567 pound hog named Mikey.

Spotosaurus Rex will spend the rest of the State Fair in a labeled pen near the west entrance of the Swine Barn.