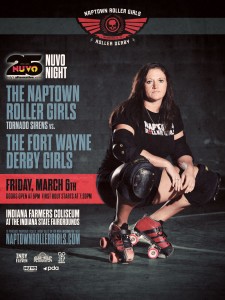 The Naptown Tornado Sirens are back in action on Friday, March 6th at the Indiana Farmers Coliseum, facing off against the Fort Wayne Derby Girls.

Fort Wayne’s roster is made up of many former members of the Tornado Sirens, including players who were on the team that went to Women’s Flat Track Derby Association (WFTDA) World Championships in 2011 and 2012.

Because skaters pay to play, they can also choose where they play, even if it means a long commute several times a week.

“It’s going to be an emotional night for everyone involved,” says league spokeswoman Devon “Peyton Slamming” Dean.  “Naptown fans know most of the players on the track as current or former Tornado Sirens.”

Dean also says she expects some conflicted emotions from the fans.

Fort Wayne is coming off a decisive home opening victory against Bleeding Heartland (Bloomington).  The Tornado Sirens are undefeated so far this season.

The night’s featured charity is the ATI Foundation, an organization dedicated to helping children with physical impairments get the resources they need for a better quality of life.

The night will also be part of the on-going celebration of the 25th anniversary of “NUVO,” Indy’s alternative voice and a longtime Naptown sponsor.

Tickets are available through Ticketmaster, the Indiana Farmers Coliseum box office, or at local vendors around the city.  More information is available at Naptownrollergirls.com!