You are here: Home / Arts & Entertainment / Rascal Flatts to open for The Rolling Stones in Indianapolis 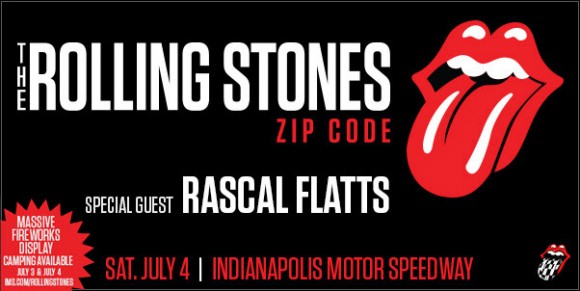 The Rolling Stones have announced that Country superstars, Rascal Flatts, will be the special guest artists opening their show in Indianapolis on Saturday, July 4 at the Indianapolis Motor Speedway.  ZIP CODE, the band’s 15-city North American stadium tour, kicked off in San Diego on May 24, and has made stops in Columbus, Minneapolis, Arlington and Atlanta. The tour will also have the band performing in Orlando, Nashville, Pittsburgh, Milwaukee, Kansas City, Raleigh, Detroit and Buffalo before wrapping in Quebec on July 15 at Le Festival D’Été de Québec.

The best-selling country vocal group of the past decade, Rascal Flatts (Gary LeVox, Jay DeMarcus and Joe Don Rooney) has scored 15 No. 1 songs, sold over 22.8 million albums, over 29 million digital downloads worldwide and earned over 40 industry accolades. Their current, ninth studio album, REWIND (Big Machine Records), debuted at #1 on the Billboard Country Albums chart, making them one of only four acts during the SoundScan era to have eight consecutive studio albums debut in the top spot. One of the hottest-selling acts on tour in any genre, Rascal Flatts recently kicked off their headlining RIOT TOUR 2015, which will be making stops across the country throughout the summer.

“What an incredible honor for us to share the stage with real life rock and roll icons, the Rolling Stones! There are a lot of bucket list moments that you dream up as a performing musician, and this is a pretty wild one to actually have come true. You in fact CAN get some satisfaction!” said Jay DeMarcus.

The Rolling Stones ZIP CODE tour will see Mick Jagger, Keith Richards, Charlie Watts and Ronnie Wood head back out on the road after their critically-acclaimed 14 ON FIRE tour in Asia, Europe, Australia and New Zealand in 2014. The iconic band will treat their generations of fans to special one night only shows, with a set packed full of classic Stones hits such as “Gimme Shelter,” “Paint It Black,” “Jumpin’ Jack Flash,” “Tumbling Dice” and “It’s Only Rock ‘N’ Roll,” as well as special gems from their extraordinary catalog.

Tickets are on sale now at Ticketmaster and indianapolismotorspeedway.com for the July 4thconcert. Tickets are available for purchase at multiple price points beginning with a $60 Bronze Ticket. Additional ticketing levels include Silver, Gold and VIP. Please click here to view a full facility map for this event including seating areas by level as well as. Additionally, hospitality packages, including private event rooms and suites, are available for purchase. Information on hospitality packages is available here.

Camping will be offered for two nights at the Indianapolis Motor Speedway. Check-in begins onFriday, July 3, at 10 a.m., with check-out by 12 p.m. on Sunday, July 5. Cost is $100 per vehicle and tent. RV camping is $200. Amenities include restrooms and shower facilities. For more information on camping, and to purchase camping passes, click here.

All Indianapolis Motor Speedway attendees will be treated to an awe-inspiring Independence Day fireworks display.

The Rolling Stones ZIP CODE will be the first time the rock legends have played North American stadiums since 2005-2007’s “A Bigger Bang Tour.”